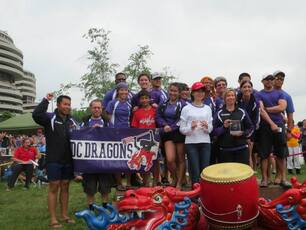 Our founding member David Armstrong started what later became NCAWPA as a women's-only paddling group after noticing a paucity of competitive paddling opportunities for women. There was no dragon boating or outrigger canoeing in the Washington, D.C. area at the time. For the first year of the club's existence, the women practiced in a dragon boat, training in Baltimore to be among the first women to ever compete in Thai swan boats. That year, the women had a strong showing in their first major competition, placing 2nd in the International Swan Boat Races in Bangkok, Thailand. In 1993, NCAWPA moved to Washington, DC. Using dragon boats acquired from Philadelphia Canoe Club, the women trained and competed in the 1994 World Championships in Hong Kong. The team placed 6th out of a field of 25 teams.

NCAWPA introduced outrigger padding to Washington DC in late 1994 and made our mark 3 years later as the only East Coast outrigger team in the world-famous 41-mile Na Wahine O Ke Kai, a Moloka’i to Oahu race, where we finishing 27th out of 63. While NCAWPA maintained the name of the National Capital Area Women’s Paddling Association, men joined the club in 1998, the same year that the club moved from the Washington Canoe Club to its present location on the Anacostia river.

NCAWPA spearheaded the development of dragon boating and outrigger canoeing both locally and along the East Coast; and became the driving force behind the creation of the Eastern Region Dragon Boat Association (ERDBA). We also co-sponsor the Washington DC Dragon Boat Festival, the first dragon boat race in Washington, DC.
Today, dragon boat racing is held all over the world and is one of the fastest-growing international sports.  Contemporary folk tradition commonly attributes dragon boat festival and racing to the commemoration of Qu Yuan, a scholar and kinsman of Huai Wang, the ruler of the state of Chu (China), who lived over 2000 year ago. Qu Yuan was a folk hero who he had drowned himself in the Miluo River in today's Hunan province, to protest political corruption. Beating drums and splashing the water furiously with their paddles, the boatmen raced into the river to save him, but failed. This event gave rise to modern forms of dragon boat racing.

Intrepid paddlers, the DC Dragons have participated in competitions in Canada, Taiwan, Thailand and Singapore, including medaling at the 2001 World Dragon Boat Championships in Philadelphia, Pa. In addition to the more usual sprint races along the East Coast, the team participated in a long-distance 1813m race in June 2013 and a 2000m race in August 2012. All members of NCAWPA are continually challenged to become top-level competitors in endurance races as well as sprint races. 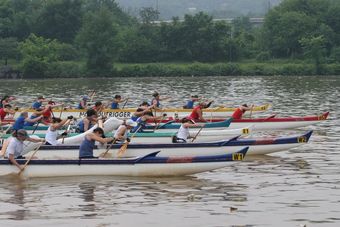 A founding member of the East Coast Outrigger Association (ECORA), NCA Outrigger now has established men and women's teams, co-ed teams, and looks to develop youth teams sometime in the near future. Though outrigger canoe has an integral place in the Polynesian culture, it was declared the National Team Sport of Hawaii in 1986 and has been widely practiced in Hawaii and California since the 1950s. It has only recently blossomed as a sport on the East Coast. In just the last several years, the outrigger racing circuit has grown to extend from Connecticut to Florida.

Unlike the sprint races that typify dragon boating, outrigger canoes seat six people and most outrigger races typically cover long distances of 10, 20, 40, or even 100 miles. For longer races, paddlers change in and out over the course of the race with an escort boat in attendance. The NCA Outrigger women's crew has completed the 40-mile Na Wahine O Ke Kai twice and regularly competes in races in Catalina and San Francisco, Calif.

Community service is the main focus of NCAWPA. We have trained thousands of people in dragon boating and outrigger canoe and built ties with the local community.  We participate in outreach events hosted by the Anacostia Community Boathouse Assoc., Health Expos, the annual Cherry Blossom Festival activities, as well as other community events.  In addition, 2019 marks the 11th anniversary of our breast cancer survivor team GoPink!DC's participation as a lead team walking in the American Cancer Society Making Strides Against Breast Cancer event.  Since 2009, GoPink!DC has raised more than $100,000 for the American Cancer Society.